Check out the latest news about "Tales of the American" and the Arts District community. 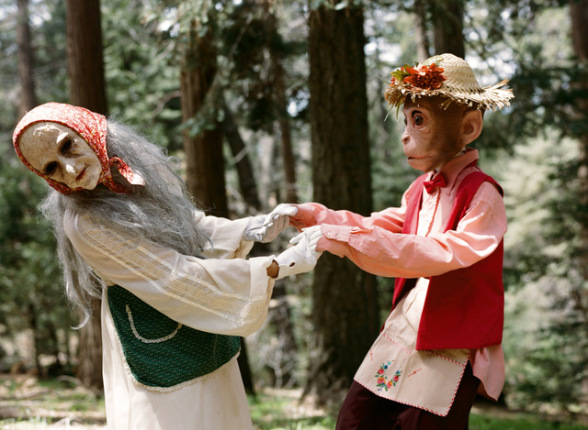 A new film by Marnie Weber is available for streaming. The Cabin of Mothra Crone (2021) features a soundtrack by Weber, who was a member of the Party Boys, the first band to headline at Al's Bar in 1980.

Weber has a new exhibition of her work at Trinity University in Austin, TX. The film is available for a limited time through March 27 to stream through Vimeo or here on the artist’s webpage.

“The Cabin of Mothra Crone” was filmed using an iPhone at the artist’s Lake Arrowhead cabin and includes wild animal footage from her security cameras. The film’s narrative follows an old artist crone who lives alone in a deep forest cabin where she is visited by a curious monkey and a mysterious moth. It operates as a self-portrait through character exploration, as Weber herself performs the roles of the three main characters. 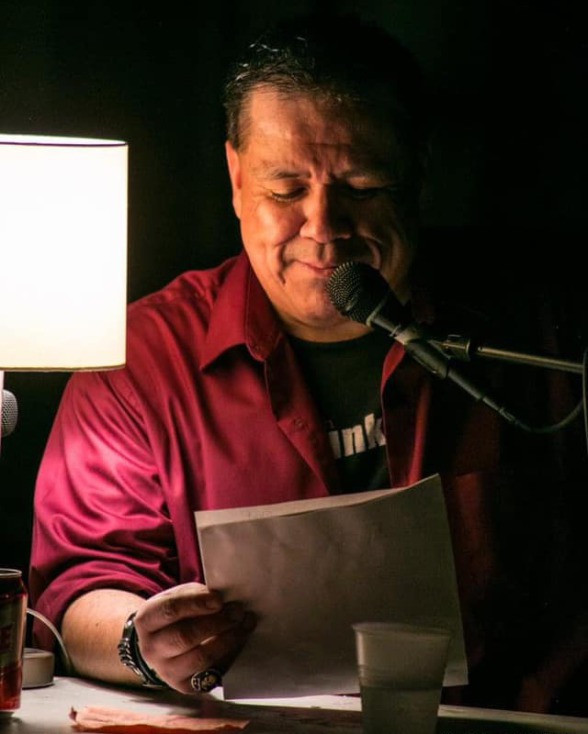 Jim "The Beast" Marquez reads one of his stories at Art Share L.A. (Photo © Rick Mendoza) 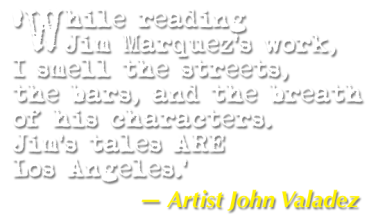 He's been called "the Chicano Charles Bukowski," but he's more familiarly known among his friends and fans as simply "The Beast." Prolific writer and DTLA denizen Jim Marquez passed away after a brief illness on Nov. 30. He was 54.

Born and raised in East L.A., Marquez was a hard-living, hard-drinking novelist in the vein of Hunter S. Thompson and Henry Miller. He published more than a dozen books — both fiction and non-fiction — set in the seedy streets and bars of downtown. Just before the pandemic, Marquez set off on a journey across Europe and wrote about it in the memoir, "A Mexican-American in Paris: Beastly Tales Romping Across Pre-Covid Europe."

Marquez returned to L.A. and was living in Koreatown when he died. His books — "A Movable Beast: Tales from L.A. and Beyond" and "Beastly Bus Tales," among others — display a gritty gusto that is simultaneously funny and sad, sometimes violent, and brutally honest. Marquez brilliantly captures the beauty and the horror in the underbelly of Los Angeles. 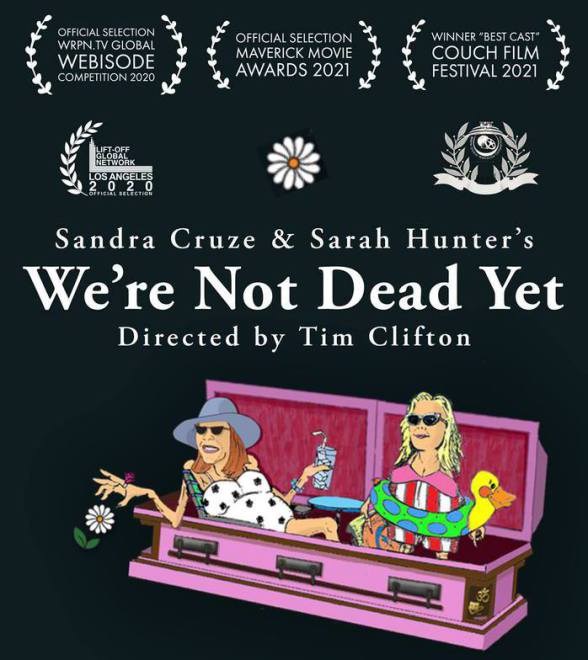 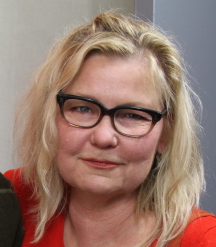 "Tales of the American's" own Sandi Cruze, onetime bartender at Al's Bar and hair stylist extraordinaire, has launched a new web series on YouTube.

"We're Not Dead Yet" stars Sandi and her writing partner, Sarah Hunter, as Dita and Lilly, longtime best friends who don't know how to act their "certain age."

A featured selection of the 2021 Marina del Rey Film Festival, the short episodes are long on laughs as the sexy silver sirens get into trouble but always manage to land on their feet. 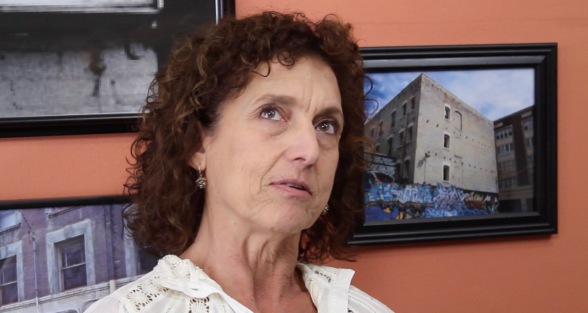 Miriam Feldman was interviewed for "Tales of the American." Her new book comes out July 21. 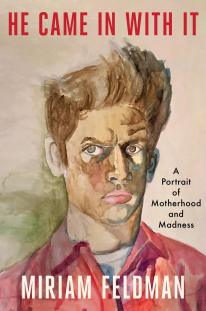 Painter Miriam Feldman has written a memoir about her "solitary forensic journey into the lonely labyrinth" of her beloved son Nick's mind after he is diagnosed with schizophrenia.

He Came In With It examines the effect that mental illness has on a family and the shortfalls of American society when it comes to dealing with it.

Feldman and her husband, Craig O'Rourke, met in 1981 at Al's Bar, where she was bartending and he was director of the American Gallery located upstairs in the American Hotel, where O'Rourke also lived. They married and had four children, but Nick's illness made for a tumultuous home life that nearly unspooled the entire family.

He Came In With It is now available on Amazon, Barnes & Noble or your local bookseller.

Emmeric Konrad's Vision of the American 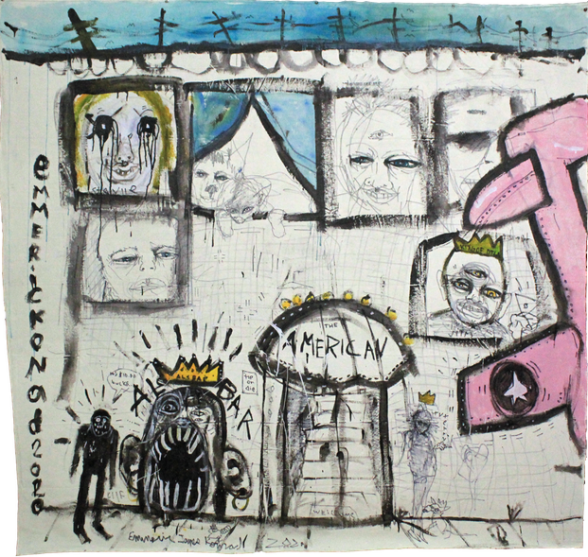 As a backdrop for a Cartwheel Art Zoom talk on June 14 by filmmakers Pamela Wilson and Stephen Seemayer, L.A. artist Emmeric Konrad painted his vision of the landmark American Hotel, where he once lived. When interviewed for the documentary "Tales of the American," Konrad procaimed, "You don't just live at the American Hotel, you become part of the American Hotel." Konrad's work is represented by Ren Gallery. 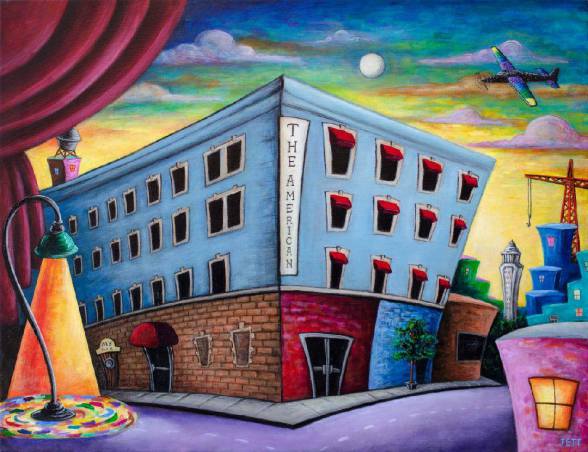 Painter Jett Jackson's beautiful landscape of the corner of Hewitt Street and Traction Avenue (the centerpiece of which is, of course, the American Hotel) is the new background photo for this website. Jackson lived and worked in the American Hotel for many years, starting in the early 1980s. Click on the painting to find out more about Jackson's work. 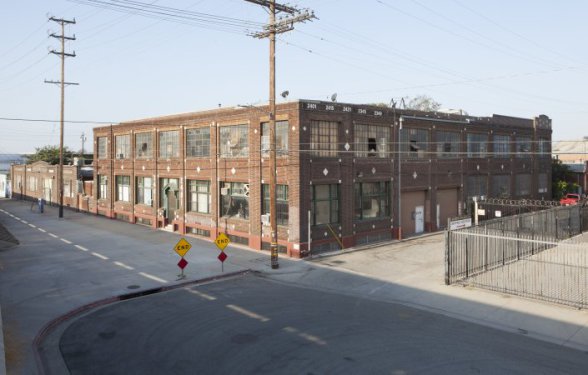 The Santa Fe Art Colony became an Artist in Residence building in the 1980s.

The Santa Fe Art Colony, which has housed artists for nearly 40 years, has been granted status as a landmark by the Los Angeles City Council. Several of the interviews for "Tales of the American" were conducted at the Santa Fe Art Colony. It's one of just a handful of true artist buildings left in the Arts District. 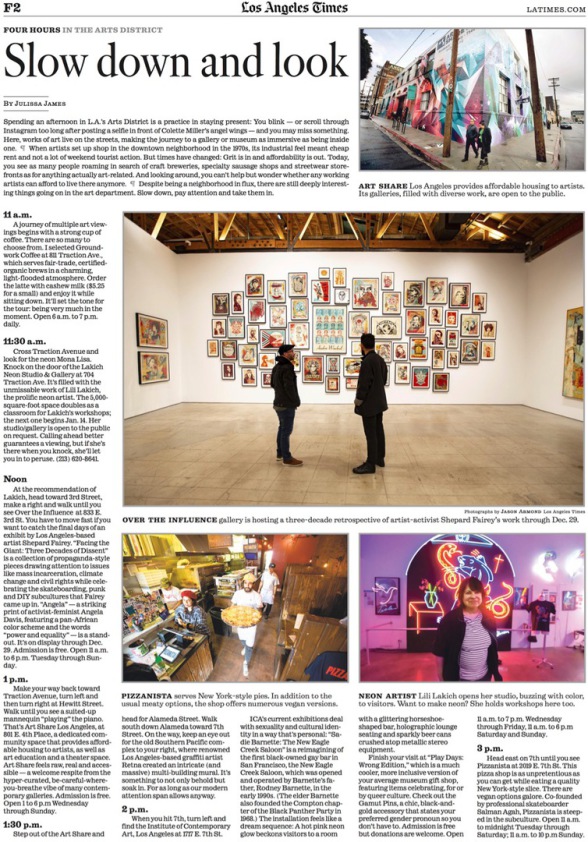 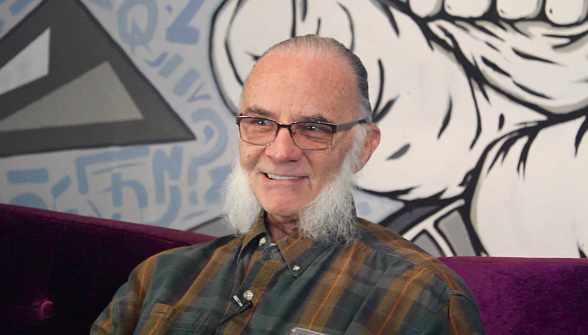 Frank Theobald was a third-generation native Angeleno, raised on the streets of Downtown L.A. He and his husband, sculptor David Hollen, had a studio across the street from the American Hotel for many years before development forced them to relocate to another loft in the Arts District.

The couple’s space in the basement of 810 E. 3rd St. became a modern salon, where all the artists in the community around Traction Avenue and Hewitt Street gathered for drinks and lively conversations.

Both Frank and David were interviewed for the documentary “Tales of the American,” sharing their experiences as part of the Arts District.

"The people that are moving here are moving here because they're attracted to that sense of community," Theobald says in the film. "But unfortunately, their sheer numbers are destroying it."

On Thursday, Oct. 17, 2019, Frank Theobald passed away at the age of 70 surrounded by his husband and many of their closest friends. Frank's vibrant spirit, his vast knowledge of Los Angeles history and his indomitable sense of humor will be sorely missed. 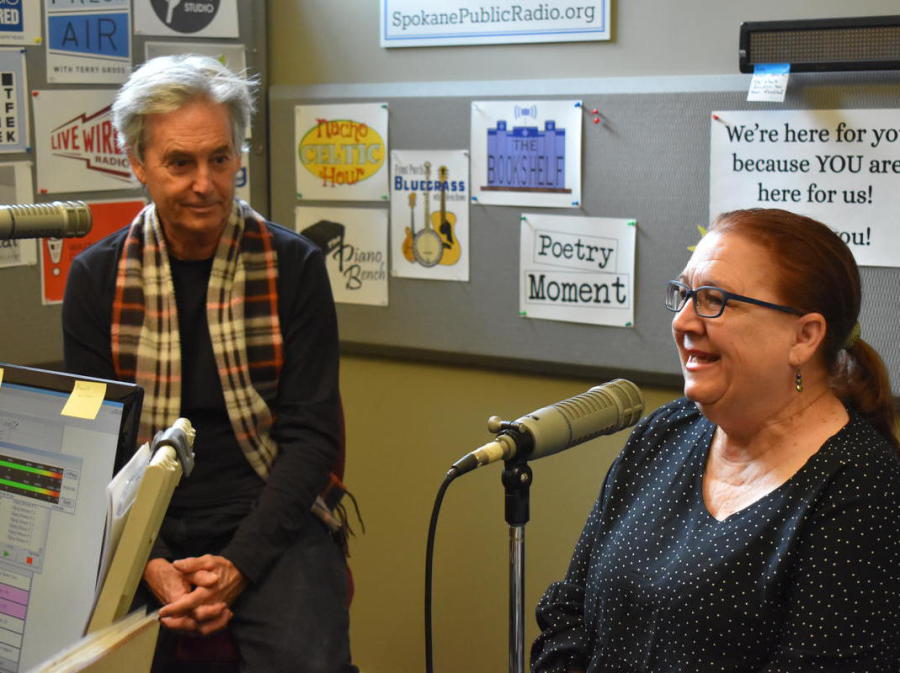 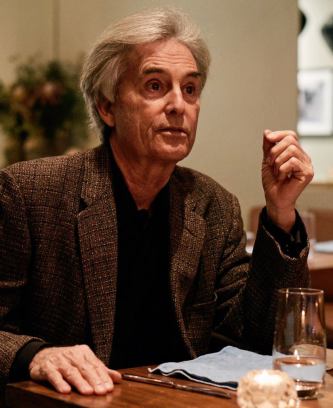 "Tales of the American" director Stephen Seemayer is featured in a new nytimes.com podcast focusing on culture and food in select American cities. Interviewed at the American Hotel, Seemayer shares stories about his decades in downtown Los Angeles in the latest episode of "The Special," a partnership of The Infatuation, T Brand Studio and BMW.

Artist Peter Greco joins Seemayer to talk about his mural on the American Hotel during the half-hour podcast highlighting the Arts District. 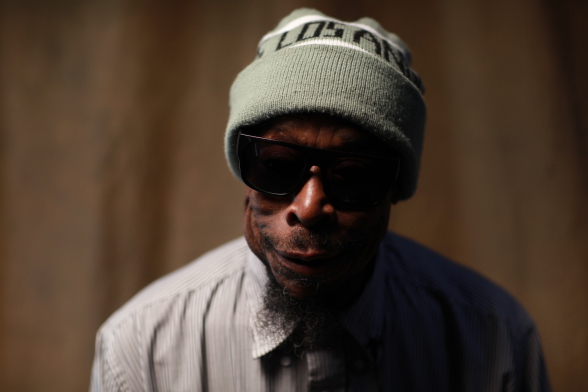 In the early 1980s, Dr. Mongo was an ex-con living on Skid Row in Downtown L.A. when he found his way to Al’s Bar and started selling poems to artists and others entering the punk-rock dive.

“I'd come down here and get people before they come in the place, recite a poem to them, and, you know, get some money,” he says in the documentary “Tales of the American.” “I became Al's Bar's Poet in Residence, right?”

Mongo Taribubu — a name he adopted after studying philosophy and literature at Case Western Reserve University — was born in Memphis in 1940. He died this week in Los Angeles. He was 78.

He performed his poem “Penitentiary” — in which he personifies the soul-crushing brutality of prison — many times onstage at Al’s Bar.

The poet’s good friend and artistic collaborator Drew Lesso has said: “Dr. Mongo doesn’t deny the hardship of life or the beauty of life. He is whole in his poetic expression. That is his triumph.”

"Tales of the American" director Stephen Seemayer recently was a featured guest on Corridor Cast, a weekly podcast produced by the filmmakers at Corridor Digital. 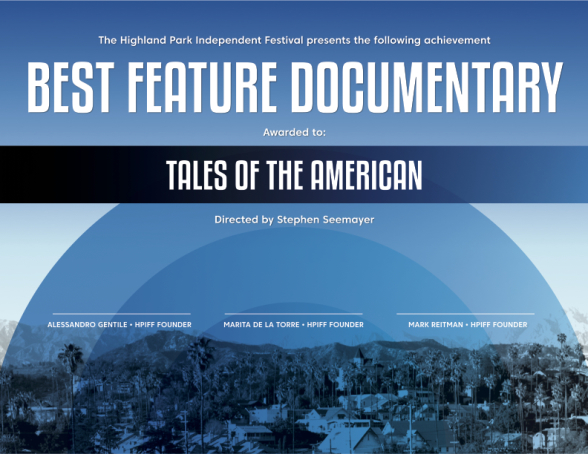 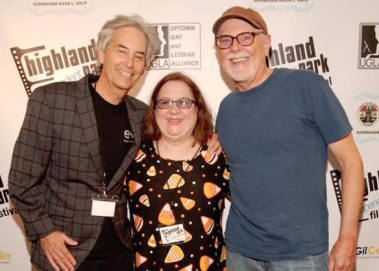 We are very honored to announce that "Tales of the American" has been awarded Best Feature Documentary at the Highland Park Independent Film Festival. Director Stephen Seemayer, Writer/Editor Pamela Wilson and Cinematographer Raymond Y. Newton would like to thank the HPIFF for its support and the chance to share "Tales of the American" with a wider audience.

HPIFF was founded by filmmakers to promote the art of film in their community. It is the first film festival of its kind in Highland Park and is a "a grassroots organization, dedicated to inviting filmmakers who are producing the most unique and captivating independent cinema today to share their work with the Highland Park community," according to the HPIFF website.

This year's festival featured the work of more than 40 filmmakers. "Tales of the American," one of six feature presentations, was followed by a Q&A with Stephen Seemayer, the film's director, and Pamela Wilson, writer and editor. 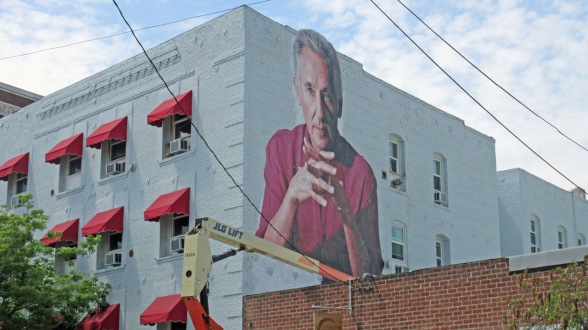 There's a terrific new LA history documentary running through Thursday at the Downtown Independent. Tales of the American tells the origins of what we now call the Arts District through the hotel at the corner of Traction Avenue and Hewitt Street — it has gone under various names since it opened in 1905 as the first LA hotel for African Americans, but the name that has stuck is the American Hotel. It's been a center of African American night life, including the site of jazz clubs, and a Japanese American corner when Little Tokyo extended into the area. After the Japanese were interned during World War II, that part of LA became Bronzeville, home to thousands of black workers from the South.

The film documents the social and ownership changes through the years, but the driving energy is the story of the American as the vortex of the first Arts District east of Alameda Street — and as the home from 1980 to 2001 of Al's Bar, the legendary punk venue where a lot of Los Angeles musical history took place. Filmmakers Pamela Wilson and Stephen Seemayer, former residents and veterans of the first Arts District, gathered dozens of former residents and Al's Bar regulars to tell stories. The film picked up a new executive producer, the mystery novelist Michael Connelly, after the director's cut was screened last year. The final version includes interviews with photographer Gary Leonard, artists Richard Duardo, Colette Miller and Kent Twitchell, musicians who played Al's Bar, ex-bartenders and downtown fixtures. John Rabe of KPCC narrates the documentary.

This is the building where Pie Hole is located, across the street from Wurstkuche, and both symbols of the new gentrified Arts District came in for hissing from the opening night crowd of friends and family. But if you wondered why the street corner is named for the late Joel Bloom, and why there is a mural of Ed Ruscha on the side of the hotel, and why people still come looking for Al's Bar, "Tales of the American" will explain it for you. 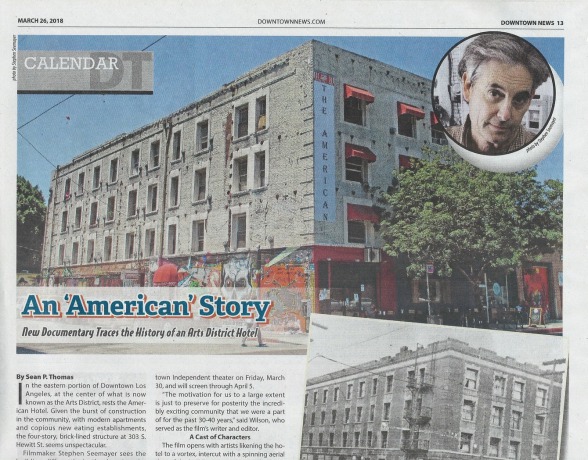 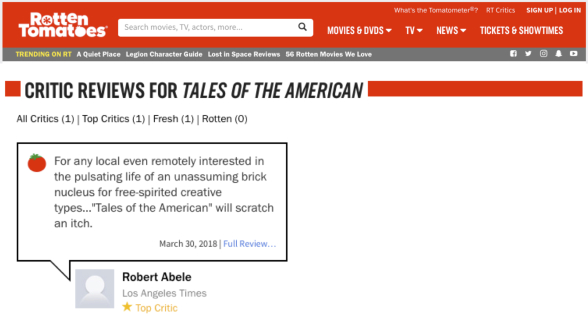 Tales of the American