Watch "Tales of the American" Now

WATCH THE "TALES OF THE AMERICAN" TRAILER HERE!

Maybe because I was a journalist many years ago I have been drawn to the documentary in recent years. My first outing in this genre was with supporting Sound of Redemption: The Frank Morgan Story, a story about Frank Morgan and jazz and Los Angeles.

From music I moved to art in helping to support the making of Tales of the American, which you can now stream on Amazon Prime.

I did some research in L.A.’s downtown Arts District for my novel The Wrong Side of Goodbye. I came across the American Hotel, which has stood at the center of the district both culturally and geographically for several decades. I knew filmmakers Pamela Wilson and Stephen Seemayer for many years (Pam copy-edited many stories of mine at the L.A. Times) and pitched in on their plans to make a film about the American’s rich history over a hundred years.

They’ve created a film that celebrates free expression, cultural change and a history that reflects the City of Angels’ sometimes rough development. I’m very proud to have my name on this film. If you have watched Bosch on Amazon Prime you can watch this film for free. - MC 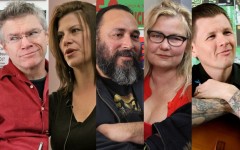 Filmmakers Stephen Seemayer and Pamela Wilson have interviewed more than 140 residents, former residents and neighbors of the American Hotel. "Tales of the American" weaves together their stories and memories of nearly four decades in what is now known as the Arts District in eastern downtown Los Angeles.

Even before artists moved in, the American was a haven for the outcasts of society. In 1905, the hotel was built to provide "first-class lodgings for negroes," when other L.A. hotels were segregated. By 1930, Little Tokyo had extended into the area, and nearly all the hotel's residents were Japanese, to be sent to internment camps in World War II.

Originally the city's first black neighborhood, the area around Traction & Hewitt has gone through many changes, including to warehouses and factories. It is now the hub of the Downtown Arts District. Brightly painted walls sport graffiti as well as sanctioned murals on streets that now are home to cafés, galleries, restaurants and theaters.

The infamous punk dive Al's Bar, where bands such as the White Stripes and the Red Hot Chili Peppers played before fame found them, was located on the ground floor of the American Hotel for 21 years. Also, several exciting, if short-lived, L.A. art groups, such as 50 Bucks, Bedlam and Deep River Gallery, have called the hotel home.